By Morgan Shannon and Jonathan Lewis

“Virginia, I want you to know that you are not invisible because I see You” – Chairman Roslyn M. Brock.

During this year’s NAACP convention, the Health Department created a “tag line” for their youth workshop entitled, Get HYPE- Healthy Young People Everywhere as a unique way to attract young health advocates and present our national health initiatives. Based on the positive feedback, we decided to expand the workshop to a national college tour designed to engage young advocates attending universities in conversations around health and civil rights. The featured speaker on this tour was our own health advocate, Chairman Roslyn M. Brock. The Chairman spoke to students on the campuses of Virginia State University, Virginia Commonwealth University and her alma mater Virginia Union University (VUU) on Monday, November 7, 2011.

Since her election, Chairman Brock has led the charge challenging young advocates to become the Association’s frontline leaders.  She understands what it takes to become a young leader in the NAACP as she joined the organization during her second semester of her freshman year at VUU and now 26 years later leads the nation’s oldest civil rights organization. The Get HYPE College Tour focused on re-engaging young civil rights leaders while utilizing health as a core issue by: 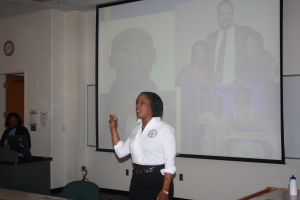 Through this tour, the NAACP registered 70 people to vote and gained 26 memberships including two life memberships. Chairman Brock placed a call to action to students. She empowered them to not let “courage skip this generation,” by advocating for policies that affect their lives.

As young civil rights leaders, it’s important for us to remember that historically, college students and young people have been the backbone of social and political movements. In the American Civil Rights Movement, it was college students that:

– were the heart of the Freedom Riders who challenged segregation laws across the south.

And it was on a college campus that a young girl decided that she wanted a part of the biggest, baddest, boldest civil rights organization in the nation.  The only way you can make a change is to join the change. As our Chairman states, remember, “Courage Can Not Skip This Generation!!!!!!!”

Jonathan Lewis is a Regional Field Fellow and Morgan Shannon is a Health Program Specialist at the NAACP.

One response to “Get HYPE: Engaging Young People to Live Healthy”